Your bad influence is why we like you so much

Sonics for your soul

Started back in January of 2000, MILLION KIDS was acombo of two bands, THE FRED WISE (Kim Masters, BC Caldwell) and HERCULON (Christian Owen, BC Caldwell). Both bands had been getting played on KXLU regularly and both were playing clubs like Al’s Bar and the Hell’s Gate. When the three came together the music fell more into a space-glam-goth sonic with moments of frenzied souncscapes.

MILLION KIDS caught the attention of some record A&R people but just when things seemed to be heading towards bigger things, Kim and BC had a child. Deciding that taking care of their new young one was more important, the KIDS went on a haitus till 2007. After being asked to do a set for a friends birthday show, we recruited Josh Nichols (Radio Sweetheart) for the drum position. He was a great drummer that brought a new punkish vibe to the group. After touring around for about 2 years, they recorded an EP :

500+ shows later, lots of great memories and friends made, we made one last record back in 2012 called “THE SINGLE YEARS”. A play on the fact that everyone in the band had split up with their significant others, including leads Kim and BC. The band was essentially over in 2012. The haitus began again until 2016 when BC was asked to play KXLU’s LIVATION show. He booked a few other small gigs recruiting Joe Dean (The Wrinkling Brothers, Crawlspace, Sassafas) on bass.

They have been lucky enough to share the stage with The Faint, The Ravonettes, Dengue Fever, Lou Barlow, The Warlocks, Ted Leo Pharmacists, Chokebore, Devics, Camera Obscura, Mike Watt and the Secondmen, and many other great local bands.

They still will play a random show if it tickles their fancy, recently doing another live perfomance on KXLU earlier this year.

BC plans to do a few shows later this year, and possibly release a new song or two.

“MILLION KIDS is a loud abrasive trio from Redondo Beach whose EP, ARRIVALS DEPARTING FLIGHTS, is as infectiously snotty as swine flu. This disc gets very high marks for brash catchiness. “Starchrusher” and “Quint” have picked up airplay on KXLU and if this outfit fais to break huge, it’s all your fault. Avoid a lifelong guilt trip at www.millionkids.com” – Ron Garmon , Mean Street Magazine Feb/2001 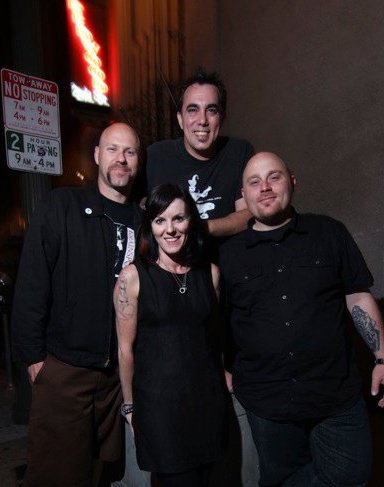 Things we have released

don't threaten me with a good time LP